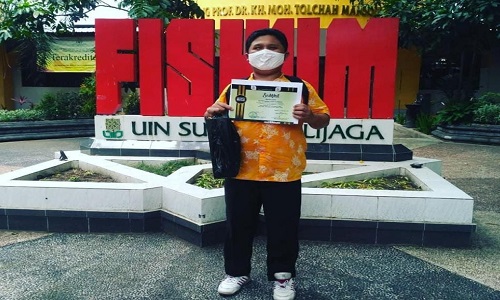 Arif, a nickname Arif Prasetya, is a student of the Sociology Department at UIN Sunan Kalijaga Yogyakarta. Arif was born in Gunung Kidul on March 18th, 1998. Arif is the second son of four siblings from Mr. Paidin and Mrs. Atika. Arif was born in a special family who almost of his family are disabilities. However, disability does not choke to carrying out his activities. As God gives people way differently, Arif is very grateful for considering that.

At the age of eight, Arif was taught by his parents to live independently and distantly from home. Arif entered school at the age of eight while people said it was too late. When Arif enrolled in school at an elementary school near the house, the school refused him because he was disabled. Indeed, rejection becomes motivations for learning and achieving further.

Arif studied at SLB Yaketunis in Yogyakarta and he lives in a dormitory provided by the school. During the dormitory, Arif received a lot of coaching and training includes; reciting the Qur'an, Arabic, English, sports, short preaching (kultum), speech, and other activities.

Arif's goal is to be a meaningful person with others. The goals are bringing happiness to families and other disabilities by achieving various achievements. When stepping on Madrasah Aliyah, Arif participated in an Instagram photo competition, which was held by OSIS MAN 2 Sleman and got in second place. Blind people who won the Instagram photo competition like an impossibility, but when Allah wills, anything happens.

Some of Arif’s friends repeatedly ask why he often tries new things. Arif answered by saying, 'I am a young who likes learning and trying new things. We must use this opportunity to seek as much knowledge as possible'

In the second semester of the 11th Madrasah Aliyah Negeri, Arif had to go to Thailand to take part in the Asia Pacific Percussion Competition. Allah finally grants the Arif's dream to go abroad and get on a plane. All of the struggles and prayer are never wasted. Furthermore, Arif and his team won the percussion competition award in Bangkok.

After graduated from Madrasah Aliyah, Arif enrolled at UIN Sunan Kalijaga Yogyakarta in the SBMPTN test and he was accepted in the Sociology Department, Faculty of Social and Humanity Sciences. Several achievements were gained Arif including 1st place in the national opinion video competition organized by the Mata Hati Indonesia Foundation. Recently Arif was selected as an outstanding student who received the 2020 UIN Sunan Kalijaga Quality Award.

Arif Prasetya tries to be a blessing for himself, family, and others, even for Indonesia and Islam. Arif wants people could be motivated by this story and change the paradigm that people with disabilities deserve to school, study, and achieve a lot of achievements. Everyone just needs to try and pray in order to make his dream come true, not just forgotten dreams.

Arif hopes that anyone who has read his story is confident to achieve all of his dreams and do not forget to pray. Allah answers your appeals as long as you try. Your intelligence is no use if you are unable to understand others. Also, you need to share with others in order to make it more useful.(Arif Prasetya)